A show of hands… how many people got caught up planning Christmas and let New Year’s Eve fall by the wayside? It’s okay, you can admit it. Around the holidays it’s easy to get focused on the tree, presents and egg nog and forget about December 31st. But then, after the garland has lost its shimmer, we face New Years Eve wishing we had planned something memorable.

Don’t fret, there’s still time to throw a fantastic party with one of our instant-download mystery party game kits! Here we run down our top 6 recommendations guaranteed to spice up your New Years’ Eve party and make it a night no one will ever forget! 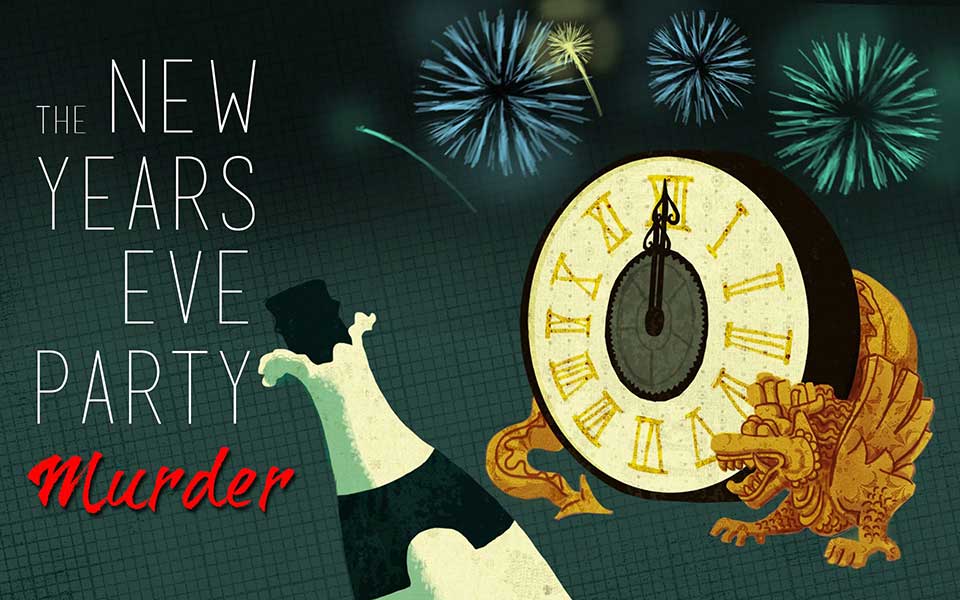 This might seem like a bit of a no-brainer! Designed specifically for a New Years Eve Party, we visit the Moxey Estate on New Years Eve, when the famous archaeologist and adventurer, Holt Moxey, has set a time lock on his secret safe to open at the stroke of midnight! But when the one person who has the codes to open it after the time lock expires is found dead, all those attending become suspects in his murder. The opening of the safe is to be broadcast online worldwide at midnight, so it’s a race against the clock to find the killer – and the codes!

It’s a usual Christmas Party Murder with a seemingly normal guest list – until one of the guests is found stabbed with a Christmas star decoration in the hallway. Suddenly, everyone’s secrets are brought to light as the suspects are question to determine who had the motive, means and opportunity to kill David Reese at the Christmas Party!

Your Christmas tree is still up and your house is still decorated, so why not showcase your holiday spirit one last time and bring your guests together to solve The Winter Wonderland Murder? This mystery revolves around a tree-trimming party at a posh mansion, with a guest list filled with celebrities and footballer’s (and, of course, their wives). Discover who killed Betty Crosby under the tree in this crowd-pleasing holiday murder mystery party game!

Who was the mysterious stranger found murdered outside the chalet in the snow? Why were the slopes closed, forcing everyone back to the chalet in the first place? No one is who they seem in this winter-themed murder mystery party game perfect for a cozy New Years Eve party activity!

Are you ready to throw off the holiday clothes, decor and music and change it up? Take your guests back in time to The Half Moon Club, where Fanny Birchwood was just ‘bumped off’ in the alley! This Roaring 20s murder mystery party game has been our best-seller for a decade, and for good reason – it’s great fun for any crowd!

This one showcases the gangsters a bit more than the flappers, and answers many of the back-story mysteries posed in A Flapper Murder at the 1920s Speakeasy. The victim from “Flapper” is actually a suspect in “Gangster”, so whether you have solved “Flapper” before or are new to the series, this mystery is sure to intrigue you and your guests this New Years Eve! Discover who killed Bulletproof Bill Mahoney at the doomed Caterpillar Club – before the big shoot-up that will bring about the closing of Lucky Coleman’s first Speakeasy!